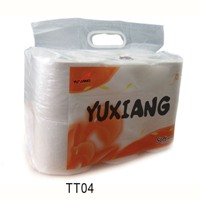 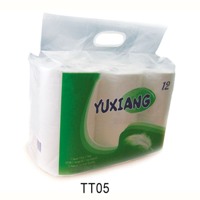 Most of us can't imagine living without rolled toilet paper. Toilet paper affects our daily routine, and yet, it is seldom remembered. It is a vital necessity that is usually taken for granted. It is made from various proportions of bleached kraft pulps with relatively little refining of the stock, rendering them soft, bulky, and absorbent. Before toilet paper was invented, different materials were used which varied amongst different cultures. In Ancient Rome, public toilet facilities provided a sponge attached to a wooden stick that soaked in a bucket of brine (salt) water. Those who lived in the wealthier suburbs of Rome used wool and rosewater. In Coastal Regions, mussel shells and coconut husk were used (mussels shells particularly). Europeans used marvelous fountains, occasionally with the luxury of warm water. In the Middle Ages, the French invented the first bidet for both sexes, unfortunately with the lack of modern plumbing. People from Islamic cultures wiped themselves first with a smooth stone, rinsed with water, and then finished off by drying with a cloth. Pebbles were used to blot the end of a male’s penis after urination. Men would carry re-usable stones and pebbles with small pitchers of water in their turbans during their busy work hours. The Colonial Americans were dependent upon the core center cobs from shelled ears of corn, whereas the Eskimos used handfuls of snow. Finally in 1880, the British invented the first actual toilet paper that was designated for wiping. The toilet paper texture was coarse, and came in a box of individual squares. Although the British preferred the coarse type of paper, the Americans were not satisfied, so in 1907, they invented a softer and fluffier toilet paper. Although soft toilet paper did indeed add a touch of comfort, it remained too luxurious for many of the middle-class Americans, so they continued to drift towards other paper products, such as old discarded mail and newspapers that were hung up by a nail in public restrooms and in the privacy of civilian homes. Soon after, the Sears catalog also became a popular wiping material. In 1930, however the texture of the Sears catalog pages became glossy and smooth, which made a less absorbent wipe. This angered people, and many complaints were sent out to the Sears Company. Today we are spoiled by the choice of different luxurious brands of toilet paper, such as Scott, Quilted Northern, Kleenex, Charmin, etc.

There are some tips that we should pay attention when using toilet paper rolls: